The link between musicians and their cars is often a strong one. George Harrison, Nick Mason, Jay Kay, Jeff Beck; there’s just something about musicians that makes them great car lovers. Maybe it’s the way that there are echoes and design cues from cars in some bits of musical equipment – the ‘horns’ on a Fender Stratocaster seem to mirror the fins on a 1959 Cadillac or simply because they’re both a sort of ‘kit’, which attract followers.

One of the most prolific and successful of these celebrity car collectors is none other than Eric Clapton, whose love of Ferrari (not to mention incredible homes) has been known for decades. Though there are no formal lists of the cars he’s owned throughout his lifetime, some are better known than others. Through his 2007 autobiography, countless websites checked and a bevy of other sources, we’ve compiled a list of cars known to have been owned by him as well as having an in-depth look at some of the more important ones throughout his life.

Most recently Clapton has been in the press for his purchase of a specially commissioned one-off Ferrari 458, designed to pay homage to the 512BB. Though a price was never officially disclosed, rumor has it, the SP 12 EC cost him in the region of £3 million ($4.75 million). On the face of it, it looks a bit baffling really, a new, standard 458 costs £170,000 and you can get a 512BB in good nick for £125,000 or more if you want one of the originals with the two tone paint scheme. Really, he could have bought a 458 and a 512BB, saved some money and just called it a day. But it’s when you find out he originally wanted a V12 to go into the SP12EC that it all begins to make sense- a 12 cylinder 458 would be the perfect tribute to the 512’s boxer engine. For whatever reason, the end product doesn’t use Ferrari’s current V12 engine or any variation on it, but instead has the standard 570 hp V8 from the 458. Eric’s love of the original 512BB is so much so however that he has already allegedly owned three of them already.

The first car Eric Clapton added to his personal collection was an odd choice, not helped by the fact he didn’t yet even have a license, though he had been buying driving cars for many years before he even had one. “It was a 1938 right-hand drive Cadillac Fleetwood that had been made for the London motor Show and I saw it in a garage in Seven Sisters Road. It was huge, in perfect condition and cost only £750. Even though I couldn’t drive, I bought it anyway…. It sat there, getting covered in leaves and I used to just look at it out of the window. A couple of times Ben Palmer drove me around in It, but he said it was a nightmare to drive because it was so big, and had no power steering.” (From his 2007 autobiography) 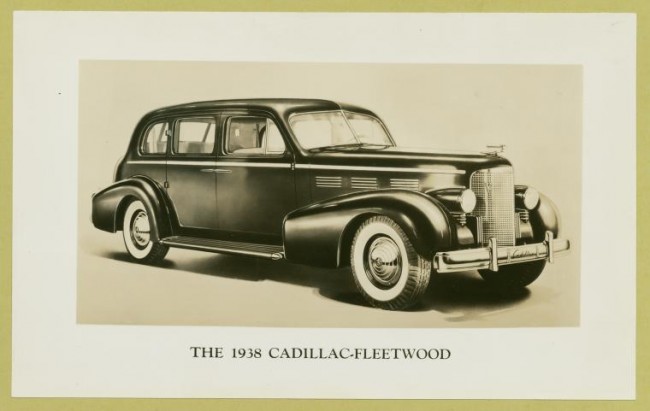 For Eric, his personal obsession with Ferrari started from an early age, being a fan of the grand prix heyday of the 50s and 60s, but it wasn’t until George Harrison brought over his new 365 GTC to show off that he became a collector of them, an experience he writes about in his 2007 bestseller autobiography: “One day in the late sixties he (George Harrison) arrived at my house in a dark blue Ferrari 365 GTC. I’d never seen one in the flesh before and my heary melted. At that point, it was like seeing the most beautiful woman on earth, and I decided there and then, that even though I couldn’t drive, I was going to have one too.

I had no license, and had only ever driven an automatic, so I set about teaching myself to drive using a clutch, in that Ferrari. I loved that car, and when I was in the Dominos I toured in it.” Like the 512BBs, Eric has owned multiple 365 cars over the years

Undoubtedly the longest and most enduring motoring relationship the musician has had is with his 1964 250 Lusso- Lusso of course being the Italian word for ‘luxury’ and meant as the most luxurious two seater variant of the 250 bloodline. The most famous 250 Lusso was owned by Steve McQueen and sold for $2.3 million in 2009. The slightly abnormal shape of the front, which incorporates a three piece bumper has lead many people to believe that it is one of the most beautiful cars ever to be produced by the Maranello company. The Lusso used the V12 “Columbo” engine already seen across the 250 range and beyond. The “ripping silk” sound produced by the V12 is one that the musician is said to be very fond of. In the car’s 18 months of production, only 350 were made, just adding to the elusive nature of the 250 line-up.

At one point, around 1967, George Harrison gifted Clapton his custom decorated Mini Cooper, styled by the coach builder Harold Radford. Radford boasted the ability to make a Mini feel like a luxury automobile, and with all of the option boxes ticked, would cost the same as one; a Radford Cooper at the 1969 Paris Motor show retailed for £5,200- about the same price as an Aston Martin DB6 at the time. A standard Mini then cost £850. The Mini was decorated with painted on Indian peace symbols and featured in the Beatles film Magical Mystery Tour. So Iconic was that particular Mini that in 2009 a one-off ‘new’ Mini was decorated as a homage to George’s original car and auctioned for Harrison’s Material World Foundation. Though Clapton only owned the car for two years, before returning it to Harrison, if anything it just adds a bit to the car’s already impressive provenance.

In an interview for Ferrari.com from 2010, Eric stated his favourite Ferrari is still his 250 Lusso, but goes on to say that he spends a lot of his time driving the 612 Scaglietti, one of Ferrari’s most controversial cars of recent years. 612’s problem was that while exquisitely made and with an extraordinary sense of attention to detail, as indeed all Ferraris have, it was criticized by some for being too tame to be a proper Ferrari. Where the 612 did do exceedingly well though was as a 2+2 grand tourer, perfect for long trips across Europe, making it popular among many highly paid businessmen.  Though Ferrari replaced the 612 with the FF a year after the interview took place, Clapton seemed to hold the car in very high regard saying he preferred it even to the 599 GTB (which he also owns).

Both Nick Mason and Jay Kay were among the lucky 350 customers originally offered Ferrari Enzos back in 2002. Not only was Clapton the first of the three to get one, he was the first person in the UK to have one. In addition to that, while most customers chose to have their cars delivered from Ferrari, meaning they have to be shipped all the way from Maranello, but that wasn’t a problem for Eric. According to the website ferrariownersclub.co.uk: “Most people leave here with their cars on a flatbed truck, but Eric left with a huge grin and insisted on driving it all the way back home.”  The Parisian police took exception to this and pulled over the yellow Enzo, after he was caught doing 145 mph on a public road.

In his 1983 album ‘Money and Cigarettes’ Clapton sang that ‘I get off on ’57 Chevy’- a point proven by his garage full of hot rods and custom vintage American cars. With his obsession of ‘50s American culture and inspired by the likes of Buddy Holly, it’s only natural he’d have a lot of love for the cars that helped shape that decade and the music surrounding it. Many of his award winning custom jobs were made by Roy Brizio- a legend in his field. Notable pieces in his hot rod collection include a 1932 Ford Roadster, a custom 1949 Chevy pickup and a 1932 Ford Victoria with a Roush V8. All of his cars have been painstakingly, yet subtly fitted and detailed; enough to turn heads but without screaming ‘look at me.’

To date, this is the most comprehensive list of cars that Eric Clapton has owned that I am aware of, but if you have information of any more, leave a comment below! Additionally, we’d like more information on the personal car collections of other musicians and entertainers like Kanye West, Lil Wayne, Wyclef Jean, Snoop Dogg, AKON, T-Pain, Funk Master Flex, Billy F. Gibbons of ZZ Top, Kenny Wayne Shepherd and Jerry Seinfeld.