Audi won the Le Mans 24 Hours for the tenth time in 12 years following a closely-fought race with Peugeot.

The number two car of Andre Lotterer, Marcel Fassler, and Benoit Treluyer was left to fight off three Peugeot’s for the win after the #1 and #3 cars crashed early Saturday.

First to go was the R18 driven by Scotland’s two-time winner Allan McNish, who miraculously walked away from the wreckage of his car after a high speed accident. McNish’s team-mate and last year’s winner Mike Rockenfeller was next to leave the race after his car touched a Ferrari and crashed into the barriers.

Audi’s only survivor held the lead and kept the chasing Peugeot pack at bay, crossing the finish line by a mere 13.854 seconds, with Andre Lotterer behind the wheel.

Audi chief Wolfgang Ullrich said: “This was the toughest win of all! It was very tight from the beginning, then losing two cars with horror crashes, we’re lucky both drivers are with us and are fine. Our emotions have ranged from the top of the mountain down to the deepest caves.” 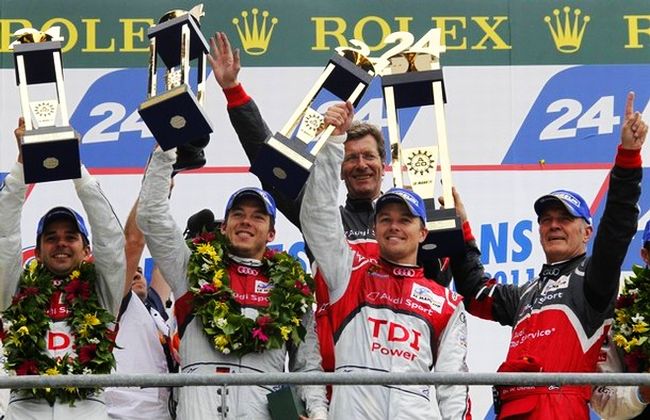 The LMP2 category was won comfortably by the Greaves Zytek-Nissan shared by Karim Ojjeh, Tom Kimber-Smith and Olivier Lombard.

Chevrolet won the GTE Pro category with Olivier Beretta, Tommy Milner and Antonio Garcia at the wheel, as well as the amateur category, shared by Patrick Bornhauser, Julien Canal and Gabriele Gardel.

The german manufacturer won its 10th Le Mans on Sunday, becoming the second most successful manufacturer in history. Audi passed Ferrari, who recorded their 9th and last win in 1965. Porsche still holds the all-time record in the world’s oldest sports car race in endurance racing, with 16 trophies won between 1970 and 1998.