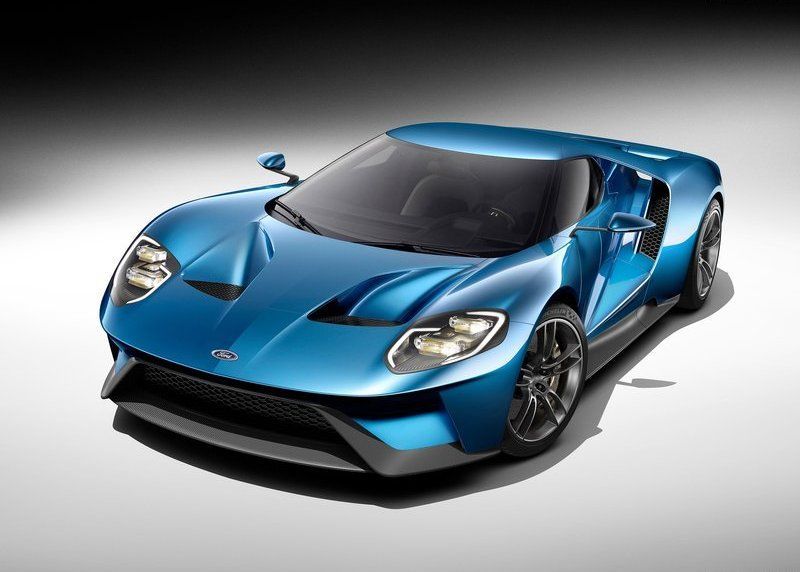 The 2015 Detroit Auto Show was packed with impressive cars, but none of them was as spectacular as the 2017 Ford GT. A surprising appearance at the Cobo Center simply because nothing suggested Ford would bring a supercar to Detroit, the GT returned into the spotlight nearly ten years since FoMoCo axed the first-generation car. Part of performance trio that included the Shelby GT350R Mustang and the brand-new F-150 Raptor truck, the Ford GT stole the show that also saw the introduction of the second-gen Acura NSX thanks to its breathtaking looks and wild EcoBoost engine. Granted, the fact that ‘Merica is finally back in the supercar business made the GT that much more interesting to journalists and visitors. 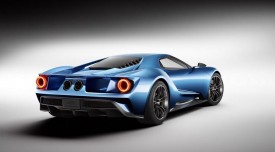 From a design stand point, the new Ford GT is instantly recognizable among its predecessors. Not it only it pays tribute to the first-generation Ford GT (2004-2006), but it also goes all the way back to the iconic GT40. The long wedge shape, the sloped nose with dual intakes and the center-mounted, twin-exhaust are only a few of the details that remind me of the GT40 that scored four back-to-back 24 Hours of Le Mans wins between 1966 and 1969. Naturally, the GT’s new body is made from carbon-fiber, a mandatory feat for any modern supercar. The lightweight materials keeps the GT’s curb weight as low as possible and enhances performance and handling. 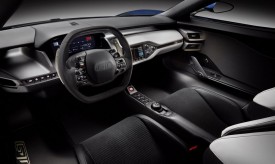 On the inside, the GT showcases a purposeful cockpit. Far from being as lavish as a limousine’s, the cabin does feature a host of lush features, but Ford obviously focused on its sporty appeal. The seats are directly integrated into the monocoque shell, while the steering wheel is filled with buttons and switches. As a result, the center console is rather discreet, a feat that helps improves roominess and access to the car’s dashboard, also fitted with various controls, as well as an infotainment system. As with most modern supercars, the GT’s instrument cluster consists of a large, configurable LCD display.

Moving over to the engine compartment, this is where the Ford GT hides its biggest surprise. Instead of a using a V-8 powerplant as its ancestors, the supercar sports a 3.5-liter, EcoBoost V-8 and a pair of turbochargers. The mill is based on the engine Ford used in its IMSA Daytona Prototype race car in 2014 and promises to pack quite a punch. While Ford has 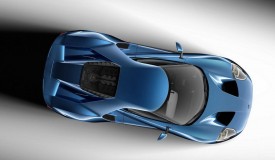 yet to give precise specifics, it did say the V-6 will produce more than 600 horsepower. Granted, we don’t need an exact number to realize this is the most powerful production EcoBoost ever. Power is routed to the wheels through a seven-speed, dual-clutch transaxle and it appears Ford isn’t planning on offering a manual transmission like it did on the first-gen GT. Given this is a race car for the road, the move makes a lot of sense, although a massive amount of purists will be rather disappointed. We expect the GT to charge from 0 to 60 mph in less than four seconds on its way to a top speed of more than 200 mph. Excited yet?

You definitely should, but we advise you keep your shirt on, as the second-generation GT isn’t scheduled to arrive until 2016. What’s more, the vehicle shown in Detroit is of the concept variety, meaning various modifications will appear as it heads into production. Scheduled to arrive in dealerships in 2016 for the 2017 model year, the Ford GT will go on sale just in time for the 50th anniversary of Ford’s first overall win at Le Mans. Speaking of racing, a race-ready GT is also expected to show up in 2016 as part of the company’s plans to return to Le Mans. There’s no word on which class the Ford GT will tackle, but my money is on the LM GTE, a category that will allow Ford to retain the GT’s looks on the race track.

We’re still a year away from seeing the production GT, but make sure stay tuned to This Week In Motors for more details on Ford’s brand-new supercar.