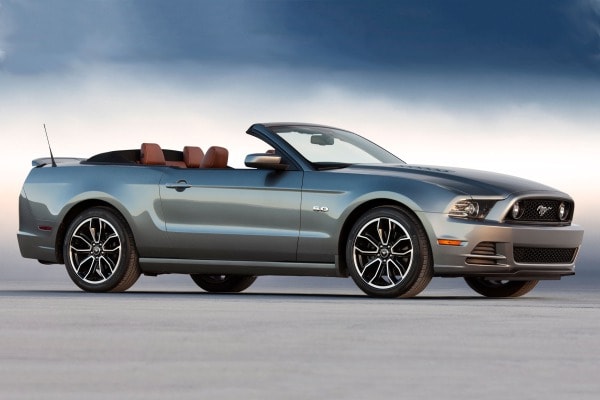 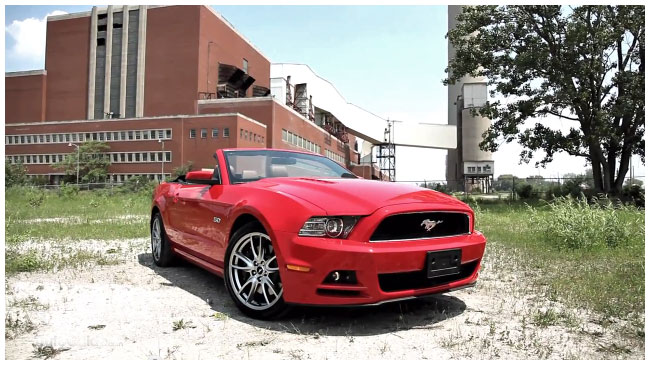 Whether you’re a part of the generation that grew up on the Mustang or not, you’re forced to accept its appeal. It’s a muscle car on the market that gives you allot of bang for your buck; no one can deny the value. The 2013 Ford Mustang GT convertible offers a ton of V8 power, superior handling, performance, technology on the inside, as well as comfort. In fact, we found it to be intimidating and pleasant at the same time. 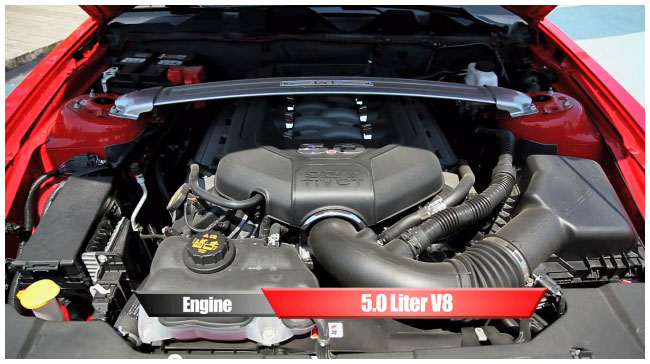 For those of you who know all about this badass car, go ahead and skip to the driving parts of this review, but for those of you who are new to the game, here’s the numbers breakdown. First up in this model, we’re rolling with a 5.0 L V8 engine. Next up, your transmission options are 6-speed manual or 6-speed select-shift automatic which allows you to enjoy the feel of manual while still retaining total control. Drivetrain? It’s all rear-wheel drive! Horsepower is awesome, delivering 420 HP @ 6500 RPM (8 more HP than the previous engine). When it comes to torque, this monster pulls 390 lb-ft @ 4000 RPM. 0-60 time is a very quick 4.7 seconds. What about fuel economy? MPG for the automatic transmission is an estimated 18 MPG in the city and 26 MPG on the highway and manual drops the city driving efficiency down a few to 15 MPG. 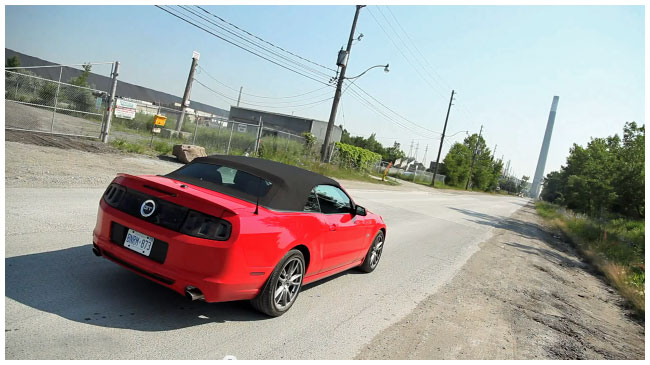 But you want to know about price and this baby starts with the standard model at $35,300 and the premium model rolls out at $39,300. 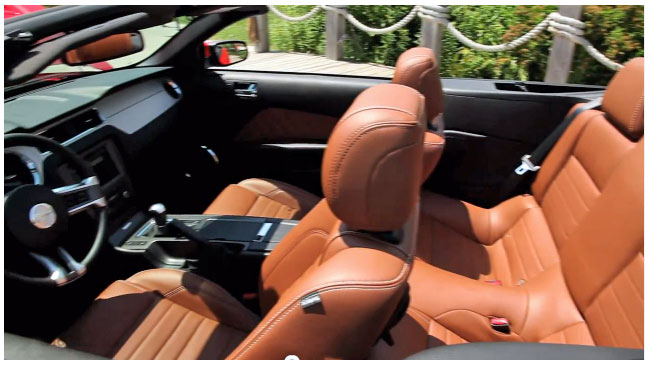 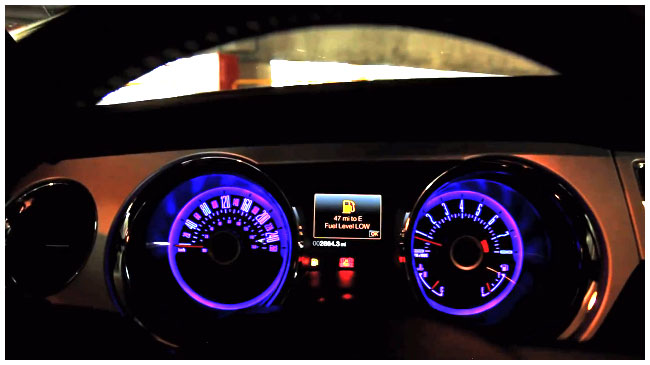 The dash has got two circular chrome clusters like you’d find in a classic model but at the same time in the center you’ve got a technological display dash. But our glowing review of the interior ends there. The armrest is simply terrible. It’s leaves your arm way too high when driving to comfortably reach the massive shifter. 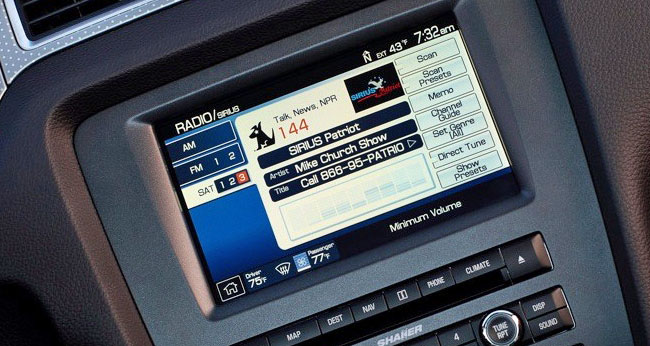 The 2013 Mustang GT convertible utilizes the SYNC software that is found on most Ford cars and trucks. It’s a great interface when it comes to music and navigation. 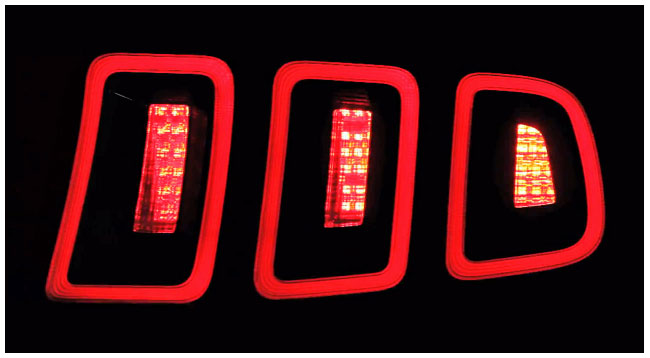 What Ford has really focused on with the car is lighting design. Looking at the front grille features reveals a ton of LED, lots of different clusters that make this car really “present.” But at the same time, in the rear the tail lights look really sharp too with the synchronous lighting system. On the inside you have some lighting on the floorboards and instrument cluster that make this vehicle feel futuristic and comfortable. And a superb touch that tops things off is that at night when you open the doors, there’ll be a nice little symbol on the ground just for you!

The 6-speed manual transmission model is not a commuter car in our opinion. It’s a car for having fun on the weekends. City driving, stopping, going in traffic? Not a real pleasure in this car. But when you get into those open gaps, you can really start to play with the power and speed of this vehicle. And there’s no denying that whatever this gear is in, you can hear it ROAR; it intimidates! And when you find yourself at a full stop, if you want to just get away from the crowd in a hurry, this is most definitely the car to do it in. But when it comes to braking, it would be advisable to begin braking allot sooner than you think you might need to. Don’t get us wrong; the braking system is indeed responsive, just not responsive enough. 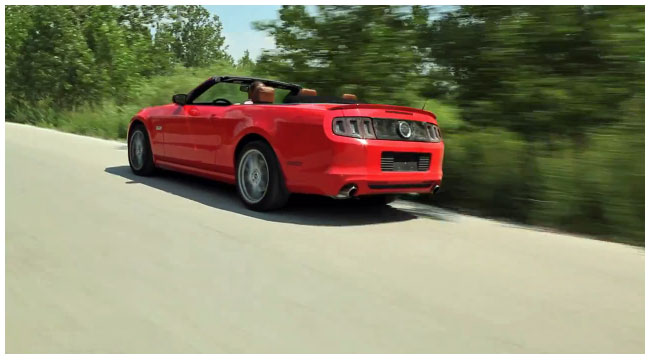 With the top down, we found that the wind was there but didn’t affect the drive at all and people just can’t stop staring at this car.

Our summary? Despite the bumpy ride at times, the lack of storage in the cabin and trunk and the paltry fuel economy, the 2013 Ford Mustang is a car that will give you a lesson in control, bravado and ultimate driving pleasure. It’s not meant for a generation anymore, it’s meant for a specific driver and if you think you can master this car go ahead, be my guest! But don’t be surprised if you instead find out quickly that you’re not the master but the servant!