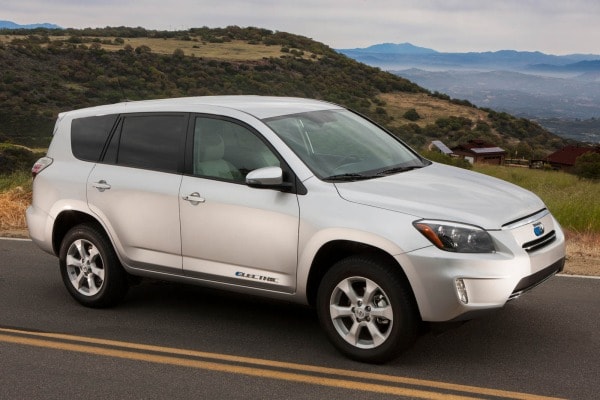 Alright, let’s start this review of the 2012 Toyota RAV4 EV with a quick breakdown of the important specs and numbers; speed and mileage. 100 miles per charge is the estimated range and it takes between five and six hours to complete the charge either at home or a charging station. Speeds top-out at about 85 MPH in Normal Mode and right around 100 MPH in Sport Mode.

Next up is drivetrain. The 2012 Toyota RAV4 EV uses a Tesla front-wheel drive single-speed and at this time won’t be offering an AWD option so you won’t be towing a yacht with this brand new electric vehicle.

And what about the most important number of all? The 2012 Toyota RAV4 EV starts at $49,800 before tax incentives (which will amount to about $10,000). However, the vehicle will only be available in four regions of California during the next three years. Toyota anticipates producing and distributing only 2,600 units. Therefore, getting one in your area might be just a little bit tough!

The new 2012 Toyota RAV4 EV incorporates some new as well as old styling on the exterior. It looks very much like a RAV4, but a futuristic RAV4. It’s got a brand new grille and some new front lights which make use of directional beams, as well as side mirrors that are aerodynamic and have side markers within them. What I like about the rear is that it’s got a new spoiler which makes it look aerodynamic and is actually quite functional. The tail lights utilize LEDs on the inside. Overall, the appearance looks better than it used to and at the very least it’s hard to believe this is an electric vehicle!

The center console has been redesigned as well as the dash board which has got two LCD panels and the center cluster. And we think the illumination within the dash looks great. If you press the Sport Mode it turns red and while in Normal Mode, it stays blue. The center console is all touch and very easy to use with no buttons at all. All functionality is basically sliding and pressing – really easy and simple to use and very futuristic!

What you’re getting here, inside and out is a great vehicle. It might drive like an EV, but in this case an EV with guts! Usually when you get behind the wheel of an EV you automatically think it’s not going to be fast or fun. Well, guess what? This vehicle defies those expectations. Essentially what you get is an EV that drives like a regular car and even though there’s a lack of sound, the power is most definitely there. Yeah, the steering is a little light. We have to admit, it’s not for heavy duty driving but at the same time it doesn’t feel too bad. When it comes to acceleration, it’s very linear.

In the end, while the all-new 2012 Toyota RAV4 EV has got great exterior styling, fun gadgetry within the cabin and superior MPG, the truth is that for most people the bottom line is still all about price and longevity. But this isn’t just another electric SUV – it’s a game changer!