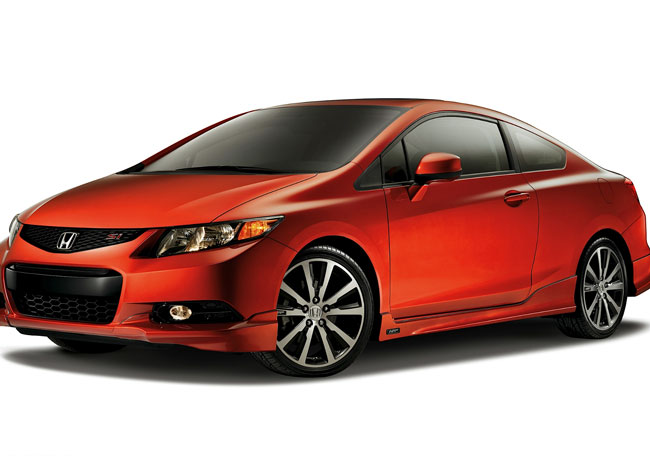 When the ninth-generation Honda Civic was introduced as well as the latest edition of the Si performance model, it was roundly criticized for simply not having the same performance numbers as much of its competition and not having a dynamic style either. When we pitted the car not long after its launch against the MazdaSpeed 3, we were both impressed and disappointed at the same time.

For starters, we were actually pretty impressed because despite the fact that it was down 1.9 seconds per lap on our test track, it did so without the use of high-performance tires and its also down 62 hp and 110 ft.-lbs. of torque to the Mazda. But what really disappointed us about all that was that it just didn’t have the feel that preview Honda Civic Si models have had. To remedy all that, Honda has unveiled the Civic Si HFP.

The HFP, or Honda Factory Performance kit, is for the enthusiast who demands the most out of their Civic Si. Included in this package is the Aero kit. It looks great and improves the overall appeareance without appearing overly feminine, something we criticized about the new Honda Civic Si when we first saw it.

On top of that, you get beautiful 18″ wheels with some stickier Michelin Pilot Supersport tires. Adding on to that, it’s got a lowered and reworked suspension with retuned shock absorbers. With the Aero kit, the car sits about half an inch lower to the ground, but the drop appears even more drastic. The whole idea being to take out allot of that body roll inherent to previous-generation Civic models.

One definite advantage of the HFP setup on the 2012 Honda Civic Si is that unlike allot of other aftermarket kits, it’s not stiffly sprung and doesn’t ruin the overall feel of the suspension and you can still be really comfortable. It accepts bumps in the road and it can still very much be a Honda Civic for everyday use.

And another thing that this package does include is red HFP floor mats, which you have to love!

After driving the 2012 Honda Civic Si HFP through two sizable autocross tracks, we are left with the conclusion that this is the car enthusiasts have been waiting for. The Michelins bite much harder in the corners and while the Si itself does actually set nicely in corners, there’s too much body roll. The HFP however has much less body roll, it bites earlier and gives the driver way more confidence behind the wheel.

And that confidence behind the wheels helps you exploit one of this Civic’s best attributes and that’s the fact that despite being a front-wheel drive car it behaves allot like a rear-wheel drive car. You can really toss it into the corners, pitching it around and scrubbing off speed by throwing the rear around as opposed to using the brakes. We found it really handy for that, especially while testing on the autocross track.

There’s no change to what’s under the hood. It’s still a 2.4L engine making 201 hp and 170 ft.-lbs. of torque. A discriminating driver must ask Honda to add a little potency to that powerplant though to keep up with some of the hot hatches in this automotive segment. But as it stands, the improved driving dynamics of the 2012 Honda Civic Si HFP really help you get allot more out of that 201 hp.

The conclusion we’re left with is that Honda should have given allot more HFP in the regular Si for the same, exact money.

All compliments aside, there are a few down-sides to the all-new 2012 Honda Civic Si HFP that we need to mention in all fairness, starting with the fact that the HFP package is really just a marketing initiative by Honda to freshen up the Civic Si brand. Why do we say that? Because it’s just not that accessible; Honda is only manufacturing 500 cars for the United States and 400 for Canada and most of those are already sold. But the main downside is the cost. The HFP Edition package costs $3,830 which brings the roughly $22,000 Civic Si up to over to over $26,000. The conclusion we’re left with is that Honda should have given allot more HFP in the regular Si for the same, exact money.

With that, we’ll leave you with a couple of gratuitous interior shots cause we didn’t know where to include them.